Great Reads Monday: Once A Brat, Always a Brat by Marilyn Celeste Morris

Born a Military Brat, Marilyn Morris attended schools overseas, in Seoul Korea, Linz, Austria and various schools stateside. From this background, she has crafted her autobiographical Once a Brat, Always a Brat, relating her travels with her army officer father from her birth in 1938 to his retirement in 1958.  When not writing or editing emerging writers’ manuscripts, she enjoys her family and friends worldwide and near her home in Fort Worth TX. True to her Brat heritage, she has a suitcase packed under the bed, ready to travel at a moment’s notice.  I know you'll enjoy Once A Brat, Always a Brat - this week's Great Read! 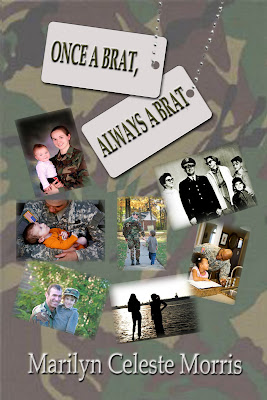 As one of the first dependents to be sent overseas at the end of WWII, eight-year old Marilyn Celeste Morris received her very own orders from The War Department.

From Seoul, Korea to Linz, Austria, she traversed the globe from 1938 to 1958 with her Army Officer father, mother and younger brothers. Between assignments in the primitive world of the Far East, to the sublime luxury of exploring castles in Bavaria, the family shuttled between the various Stateside Forts: Bragg, Bliss, Hood and Sill.

Sometimes hilarious, sometimes gut-wrenchingly sad, her narrative is part travelogue, part therapy session. She still cries at Taps and stands tall when the colors pass; yet she realizes she carries an odd mixture of pride and resentment over her nomadic way of life.

Her conclusion, however, is that she wouldn’t have had it any other way. Once a Brat, Always a Brat.

________
Dennis Campbell of BratCon.com radio has called Once a Brat, Always a Brat, "a field manual for understanding Military Brats."

To read more, visit Marilyn's website and  her check out her blogs:
Once a Brat
Marilyn's Musings
The Lady with Lupus
Editing Excellence

Buy Once a Brat, Always a Brat today on Amazon.com!

Email ThisBlogThis!Share to TwitterShare to FacebookShare to Pinterest
Labels: marilyn celeste morris, novel, once a brat always a brat


Movie Monday - I'm watching every movie that has ever been nominated for a Best Picture Oscar! 82 years of Academy award classics.